Why Chime.in is Worth the Login 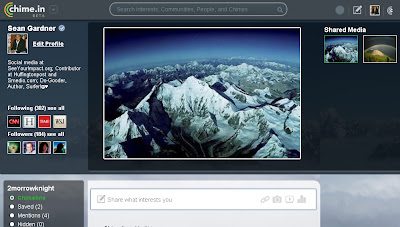 Above is my page on Chime.in, the new social network that is one of the most exciting new things in tech. You connect with groups of people and build communities around their interests. I love it. Though shopped by some as a "twitter competitor", I believe it stands strong by itself without any need for comparisons.

Yes, there will be comparisons. Facebook, Twitter, LinkedIn, Tumblr and GooglePlus have all tried to carve out an identity separate from other sites. This looks to be even harder in the coming years as smaller networks are expected to emerge to take their share of the social landscape.

Right now, Chime.in is one of the best in social media. Seriously. It is clear that Uber Media founder Bill Gross and his team have done their homework on the other sites, and have integrated their own specific ideas to create something unique. Tech editor Bianca Bosker explains:


The site allows users to tag their chimes with up to five interests such as "Apple" or "architecture", and let's people subscribe to updates about a particular topic, essentially a stream of "chimes"that are aggregated based on the tags authors have added to their posts. As on Twitter, users can subscribe to each others' feeds, though Chime.in offers additional control over what appears in their "chimeline": Individuals can choose to receive only updates pertaining to a particular subject..."

This is why Gross calls Chime.in an "interest network", a term that is also a recognition of its creative genius. It's worth a try. So when you get moment, sign up, log in and chime in.
Posted by 2morrowKnight's Awesome Blog at 12:31 AM