Hillary Clinton on the World Stage 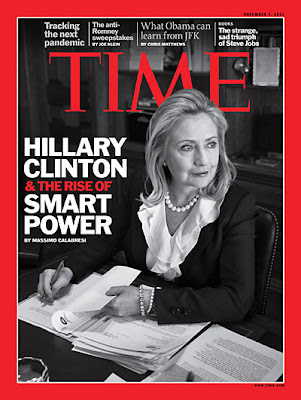 Back in 2008, a mere two weeks after the presidential election, Huffington Post blogger Matt Littman, in a piece titled What Makes a Great Secretary of State?, cheered openly for Hillary Clinton to take her current position:


At a time when the world is yearning to see America return to the forefront of global leadership, Secretary Clinton can lead the charge. She already may be a historic figure, embraced by the world community, but in this role, she would add significant international achievements to her legend.

That was 2008. And three years later, we see just how brilliant Clinton's foreign policy leadership has been.  She has been an amazing force in front of the cameras and behind the scenes. From the uprisings in Northern Africa, the wars in Iraq and Afghanistan, the Israeli-Palestine conflict, and the perpetually perplexing negotiations with North Korea, her vision is making a big difference.

Whatever differences Obama and Clinton have, they have buried them for the good of diplomacy and national security. And we have all benefited from their partnership. So its easy to see why TIME Magazine (above) put her on their current cover. She has used her power in a very smart way, and this has only elevated her throughout the world.


Though Clinton wants to step down from her post in November 2012, I hope she stays another four years. She is already one of the best U.S. Secretaries of State in history.
Posted by 2morrowKnight's Awesome Blog at 4:22 AM