Yesterday was truly a sad day. Steve Jobs passed away at the age of 56. He had a long battle with cancer, and he was visibly thinner, so we figured this day was coming. But Jobs was one of my heroes. And we want our heroes, and she-roes, to live forever. Jobs was admired on nearly every continent. A thought-leader and creative genius who believed in taking risks, and inspiring humanity to achieve the impossible through revolutionary design and cutting edge technology.

He started Apple Computers in his garage in 1976 with $1300. He failed, made lots of mistakes, and was repeatedly told no, but it never stopped him from working hard, and believing that he could give full substance to the scope and depth of his vision. He invented the personal computer, and revolutionized the music and phone industries with the iPod and iPhone. And changed the way we consume media with the iPad.

He also helped change the way we see animation with Pixar, the company responsible for some of the most stunning animated movies of the past 15 years. As Boing Boing editor Xeni Jardin pointed out, Jobs studied Buddhism, Hinduism, calligraphy and a host of other subjects - things that assisted his seemingly seamless merge of people with the power of technology. My mom met him in Los Angeles in 1982, and they had a great tech conversation. She remembered him as a great salesman for the Apple brand, and a serious "ideas" person. And she was right.

He created and debated ideas, but never let them sit on the shelf and just catch dust. I loved that! He was all about the WOW factor. Like Henry Ford, Maggie Lena Walker, Milton Hershey, Reginald Lewis, John D. Rockefeller and many, many others, his legacy will be celebrated long after his passing. As Steve Jobs himself once said:


Your work is going to fill a large part of your life, and the only way to be truly satisfied is to do what you believe is great work. And the only way to do great work is to love what you do. If you haven’t found it yet, keep looking. Don’t settle. As with all matters of the heart, you’ll know when you find it. And, like any great relationship, it just gets better as the years roll on. So keep looking until you find it. Don’t settle. 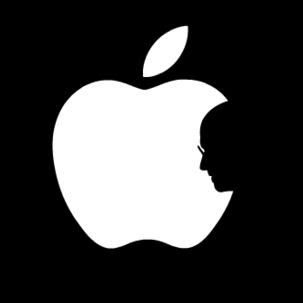 Artwork by Jonathan Mak
Posted by 2morrowKnight's Awesome Blog at 3:02 AM