This is cross-posted in the Huffington Post Impact Section.

I am a huge fan of everyday people who push the boundaries of convention to raise awareness for causes that matter. And few causes are as urgent right now as the deadly famine in east Africa.

A population equivalent to entire state of Ohio is at risk of starvation in Ethiopia, Kenya, Somalia, and other parts of East Africa. Hundreds of thousands refugees have fled the drought-stricken region, and in the past three months, nearly 30,000 children have died.

Now, one mom is using social tools like video, blogs and an unconventional fundraising platform to change that.

Blogger Sarah Lenssen decided she had had enough of watching a famine unfold - and get buried - in the news. So she dreamed up a powerful campaign to help people take action, called #Ask5for5. It works like this: you donate $5 to provide food and water in east Africa. Then, you get five of your friends to give $5.

Sarah's an inspiring change-maker that models what it means to be a citizen philanthropist. She likes to imagine what would happen if that circle got extended out 9 times (5 x 5 x 5 x 5...). In just nine iterations, the campaign would raise over $2.4 million dollars.

I had a chance to ask her a few questions about what motivated her to start #Ask5for5 and how female bloggers worldwide have powered her campaign. Here's what she said:

Why did you start #Ask5for5? I have two children who were adopted from Ethiopia in 2007 and 2010 respectively, and both of them were born in the regions that are experiencing extreme drought. The situation is very personal for me. It could be my son or daughter suffering. The idea that they would go day after day without food or water is a thought I want to push fromy mind. But the thing is, I have to imagine it -- because although they aren't mine, they are many daughters and sons suffering. 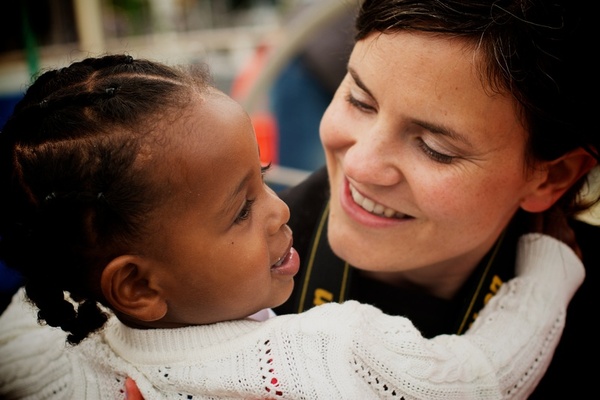 I knew I couldn't sit by and let the news overwhelm me (although that's hard when you see the grave images of what's happening). It was time for me to do something. But I knew that in order to make an impact, that it couldn't just be me. And that's where #Ask5for5 was born.

If you could tell people one thing, what would it be?

I'd want to tell people about Khaleed. Last week, his mom took him and his siblings on a harrowing 15-day journey through Somalia in search of food. Two of his siblings, ages 2 and 4, died on the way to help. After arriving at a camp for internally displaced people, 6-year old Khaleed was on the verge of death. Jon Warren, a friend and staff member at the development NGO World Vision, has seen too many children die, and he was worried. While Jon left on a two-day assignment elsewhere in Somalia, his colleagues treated Khaleed with rehydration salts and Plumpy Nut, a peanut-based food that rushes nutrients into the body. When Jon saw Khaleed again, just 2 days after he started receiving treatment, he said the difference was night and day.

When Khaleed arrived, he couldn't move. Now, he had the energy to sit up on his own. The vomiting and diarrhea had passed. He had made it through the worst. So if I could tell people one thing, it would be that there is hope. We can make thousands of stories like Khaleed's come true. We have to work together.

What inspired you to recruit female bloggers to your cause?

I've been blown away by the number of moms who resonate with what's happening, and who want to step in for the forgotten voices of other mothers and children. Blogging is a grassroots way of getting the word out to people that we CAN do something. I've connected with many other adoptive moms who've blogged over the last five years since I began blogging. And over 25 moms (adoptive and non-adoptive) I asked to join me by allowing me to guest post about #Ask5for5 last Thursday, did so with enthusiasm. I think many people are just waiting for the opportunity to do something, and #Ask5for5 has been just that: an easy way to DO something rather than feel overwhelmed. One more reason? Research done by The Pew Research Center for the People and the Press reported Wednesday that 4 percent of Americans were primarily following the story of the famine. But five times as many said the stock market was their top story. Bloggers are stepping up and using their influence to spread the word about causes that normal channels of media often struggle with.

If people can do one thing next with their five minutes, what should it be?

They should go donate $5. Then, they should email all their friends and ask them to get involved. It's simple, fast and effective. I'm telling everyone I know: we may not be able to change the world on our own, but together, we absolutely can.

You! Please join us.

We need your help. Last week, over 30 bloggers joined with me to spread the word about Ask5for5, and it was so successful, we want to get hundreds more! I'm looking for at least 200 bloggers who will allow me to guest post on their blogs during Social Media Week - the week of September 19th- 23rd. If you're willing to use your blog as a medium to spur action and help save lives in East Africa, please email me at this address! And by the way, while it's been mostly women who have jumped at the chance to allow me to guest post, men are equally powerful advocates and we're so grateful for that.