This past week, I had the pleasure of attending the huge 140 Conference in New York City - one of every year's must-see events. There are tweetups associated with the 140 conference in cities and regions around the world. This is a testament to the vision of conference founder Jeff Pulver, who has created a platform upon which every aspect of social media is discussed and dissected. Needless to say, I had a wonderful time.
I spoke a panel on about real time news. It was moderated by media mogul Jessica Northey. Also on the panel were web producer Brian White and videographer extraordinaire Sarah Austin. It was fantastic. And so were Cory Booker, Ann Curry, and a long list of speakers and presenters. This is an event I highly recommend for anyone seeking to better understand the mechanics of social media. 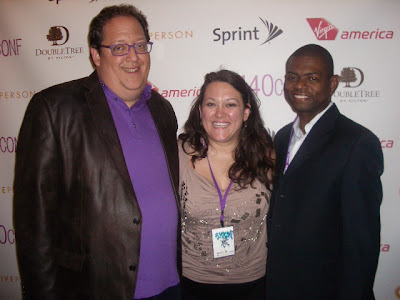 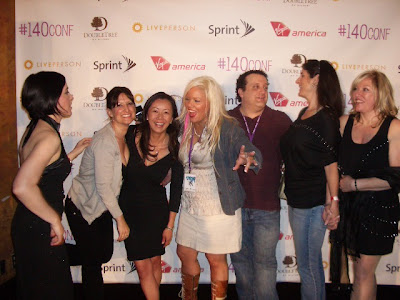 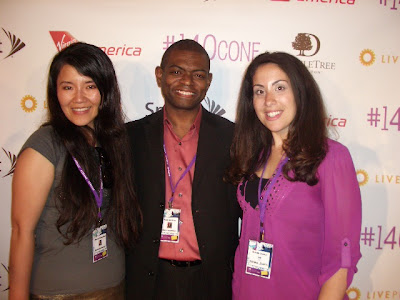 I'm pictured with recruiter Susan Kang Nam (left) and
Huffingtonpost blogger Kristen Durkin.
I learned a lot during those two days. There are many things I took away from the conference. Here are three of them:
(1) Meeting Positive Folks from Twitter is Priceless - I've been on Twitter for roughly two and a half years, and it was awesome to meet so many great folks I have communicated with online, and on the phone. I connect with people based on content and substance, not the amount of followers they have or lists they're on. So my real life meetings with them were amazing.
(2) Jessica Northey is a Person to Know - Yes, the moderator of my panel turned out to be much more extraordinary than I ever imagined. Before the start of the conference, during every intermission and during every post-conference-tweetup, person after person talked about a positive interaction or conversation with her. No kidding here. Her name was gold to a tremendous number of people. This is a woman who is not only well-connected, but who knows how to make those connections work for her. Not simply an influential woman, but someone using her influence to make an impact. When I grow up, I want that kind of sterling reputation :)
(3) Social Media Has Some Amazing People - I can't tell you the feeling I had being 30 feet away from Ted Rubin and Liz Strauss as they spoke to the crowd. Sitting in the audience, I thought: "I'm friends with some amazing people who can also rock this event." Folks like adventurers Chris Burget, Paul Steele and J.D. Andrews; health and fitness advocates Joyce Cherrier, Andy Baldwin, Eleni Kehagiaras and Amie Hoff; artists Lori McNee and Michelle Thayer; and digital strategists like Kristen Durkin, Daniel Hudson, Chris Luzader, Ken Banks, Deb Weinsten, and Laura Duran.
But the list of great folks goes on and on. Anyone can recommend speakers. So if you know of someone who is rockin' a particular subject or field and can "rock the crowd" too, let Jeff Pulver and his associates know. I'm going back next year, and it would be awesome to see some of my friends - people literally moving the social media conversation forward - on stage before a world wide audience.
Can't wait until next year!
Posted by 2morrowKnight's Awesome Blog at 7:22 AM