Technology and the 2012 Presidential Campaign 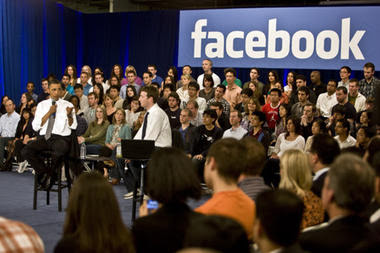 President Obama and Mark Zuckerberg at Facebook
Headquarters. Photo Courtesy of UPI/Newscom
Like many of my friends, I'm eager to see what the social media impact on 2012 will be. Twitter, Facebook, and a multitude of niche sites (reaching out to particular demographics) powered a record voter turnout in 2008. There is no doubt that this is what helped elect President Obama.
Many have predicted that social media will have a more polished, professional look this time around because the landscape has changed dramatically. This is true. But I disagree with those who say that "email and blogs" are no longer relevant. Of course they are. Twitter was supposed to eliminate blogs. It didn't. The short-lived Google buzz was supposed to be the "email killer". It wasn't. Let's be clear: campaigns will continue emailing and blogging, even as smartphones and tablets have transformed political organizing, and become more powerful tools.
Regardless of one's views, we can all agree on this: no candidate will have the type of tech dominance Obama had 3 years ago. He launched an iPhone app, purchased a channel on Dish Network, and secured ad space on popular video games. And as impressive as this sounds, it was just the tip of the iceberg. He ran the most tech-savvy, "out of the box" presidential campaign in history. I'm certain that everyone - from his potential 2012 challengers, to the cable and network news talking heads - has taken good notes.
Look forward to an amazing election that I believe will be one of the closest in history. Technology will once again play a huge part in determining the winner.
Posted by 2morrowKnight's Awesome Blog at 5:15 PM