NASA and a Future Trip to Mars 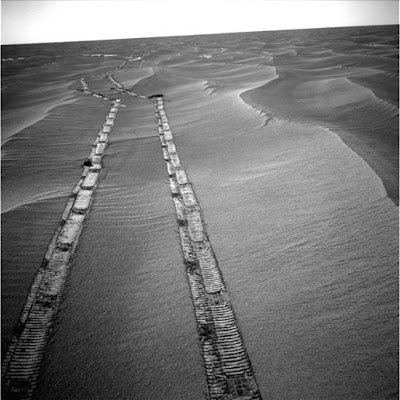 This, and all photos courtesy of NASA

Recently, I had a great discussion with a friend of mine who works for the Federal Government. He's a serious NASA geek who follows every shuttle launch and amazing discovery of new planets. He might even be on one of the trips into space by Virgin Galactic, Sir Richard Branson's "commercial space exploration" firm . And like me, he grew up on the Star Wars and Star Trek movies, and, has an ongoing fascination with the planet Mars.

Yes, Mars.
We both blame Ray Bradbury's award winning The Martian Chronicles, which fed our rich imaginations, and gave dimension to a seemingly inhabitable planet. Fast forwarding decades later, with all of the advances in technology, we can safely say, "It is a matter of when astronauts will be going there, not if." Though I don't expect to be making the 9 month trip to Mars from Earth, I will continue to be excited by the images.
The picture above is a prime example, and, its a powerful metaphor. It shows the Mars Rover Opportunity looking back on its tracks. And taking a look back, we can view the pictures of the Viking1 and Viking2 trips to Mars in 1976: 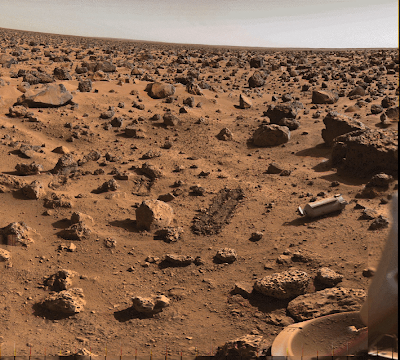 Though regarded by many at the time as uninspiring, these images provided a great foundation upon which the the two Mars Rovers - Spirit and Opportunity - have soared. NASA has done an amazing job with both rovers. In fact, they didn't think they would still be around seven years later. Check out NASA's great webpage with updated info, and awesome pictures - both color and black & white.

Mars is truly fascinating. I wish I could go to explore every inch of its landscape. I guess I'll just keep living through those who know way more about it than I do.

Posted by 2morrowKnight's Awesome Blog at 2:18 AM