The Revolution IS Being Tweeted 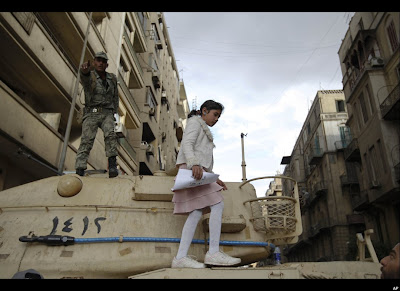 Picture courtesy of AP/Getty Images
I read Malcolm Gladwell's recent New Yorker essay regarding Twitter's impact on the Egyptian uprising. And I completely disagree with his assertions. It's along the lines of his now famous post (last October) dismissing the power of social media in global activism. To be clear, Twitter and Facebook have been to the protestors what photos became to the American Civil War: a way of personalizing the struggle for the masses.
But Gladwell is unimpressed with the use of social networks in this manner. I've always been a fan of his work. He has a grasp of history and he's an exceptional thinker. I just see Twitter and Facebook's impact from a different angle. Here's his view:

People protested and brought down governments before Facebook was invented. They did it before the Internet came along. Barely anyone in East Germany in the nineteen-eighties had a phone...and in the French Revolution the crowd in the streets spoke to one another with that strange, today largely unknown instrument known as the human voice.

He ends his piece claiming that "how" people communicate their problems is less important than "why". This is a curious way of looking at the Egyptian uprising. We all want to know "why", but should that stop us from asking "how"? As a journalist, I ask all the questions: who, what, where, when, why, and how.
And the "how" involves social media. (Check out Douglas Idugboe's post today for a great analysis).
Yes, dictatorships and regimes were defeated and toppled before the internet and mobile phones were created. But that is not the story. Like any conflict, organizing is key. Twitter and Facebook have helped in the regard, which is why the governments of Tunisia and Egypt were completely caught off guard. It's hard to crush an uprising that you never saw coming. You tweet it Seattle and its in Singapore within seconds. This is the "how" in the Egyptian uprising, and it is just as important - and powerful - as the "why".
The revolution isn't being tweeted? Really? The great mind's behind Google's Speak to Tweet effort would beg to differ.
Posted by 2morrowKnight's Awesome Blog at 8:54 AM