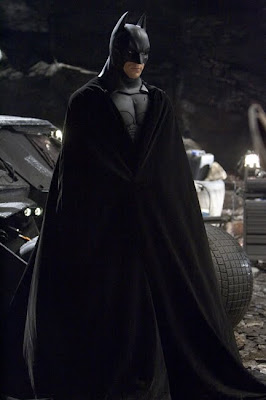 Christian Bale as Batman
I am very excited that Christian Bale will return as the cape crusader in The Dark Knight Rises, the upcoming sequel in the Batman franchise. Though it won't be released until next year, there is plenty for comic book geeks and movie enthusiasts to be happy about. For starters, director Christopher Nolan is returning. He cemented his place as a great director with the last Batman sequel, The Dark Knight. More crime drama than super hero flick, it was thick with tension, and with the sordid humor that only a villain like the Joker can deliver. It was more like Heat than X-Men.
I was not a huge fan of the casting of Heath Ledger as the Joker, but his performance was devilishly good. So I'm wondering if Ann Hathaway, who was casts as The Catwoman for the upcoming movie, will exceed expectations too. I wanted Angelina Jolie to get it because nobody plays the vixen like her. Nobody. Apparently, Bane, one of Batman's greatest foes, will also be in the next installment.
The best news is that The Riddler won't be appearing...yet. No, not because I'm not a fan. But, because this gives me time to continue campaigning for Stephen Colbert to play him. I wrote a piece in the Huffingtonpost back in September of 2009, urging Warner Brothers to select him. Sources said Johnny Depp was being considered. Who knows what happened. Maybe this means there is still time to get Colbert the role that I believe he was born to play.
But first, I look forward to another great, buzz-worthy performance from Christian Bale. Can't wait.
Posted by 2morrowKnight's Awesome Blog at 10:15 PM