A Few Thoughts on the Tragedy in Tucson, Arizona 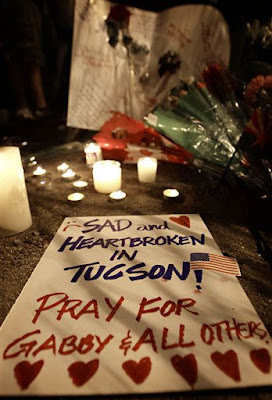 I've been struggling to find the right words to express my feelings about the tragic shooting in Tucson, which killed six people, and wounded 12 others, including U.S. Rep. Gabrielle Giffords. It's been a couple of really emotionally trying days. A nine year old girl was among those killed - a girl born on September 11, 2001. She came into the world on a horrific day, and left on another. I've lost family and friends to gun violence, so I know what the families are going through.

Interestingly, Rep. Giffords and I have followed each other on Twitter for months. She has always struck me as a passionate, principled, and very nice woman. On Saturday morning, I was doing maintenance on my account when I saw her tweet on one of my lists. I've seen her postings before, so there was nothing odd about it. But hours later, while was watching the news coverage of her shooting, her last tweet that day (confirming her location) became a reference point for every pundit and reporter on the scene.

The shootings have been blamed on the toxic, mean, over-the-top rhetoric being spewed in the political arena, and on talk radio and cable news. Whether any of that is true, one thing is for certain: this is a moment to step back and reflect. Six innocent people lost their lives, and they should not be forgotten. I send nothing but prayers to the other twelve shooting victims fighting for their lives at this hour. ☮♥
Posted by 2morrowKnight's Awesome Blog at 11:55 PM