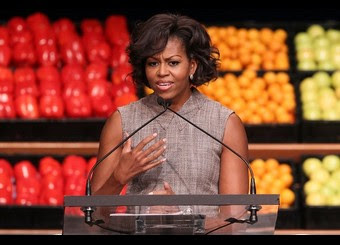 Picture Courtesy of Getty Images
Yes, there have been critics of First Lady Michelle Obama's health initiatives, but what she's doing is certainly needed. Americans are not nearly as healthy as we would like to believe, so anyone trying to change this reality is a hero (or She-ro) in my book. Unveiled last year, Obama's "Let's Move" Campaign" has been praised for its strong stance on health and wellness.
Every First Lady has a project that dominates their time in the White House. Nancy Reagan talked about drug use. Barbara Bush supported literacy programs. Hillary Clinton embraced universal health care. Laura Bush focused her attention on education in general. With big shoes to fill, Michelle Obama had to make a big splash with her activities, and she has done just that.

Last week, she appeared with executives from Wal-Mart. The retailer announced that it was offering more healthy foods, and promised to push its suppliers in the same direction. They also pledged to make even more food items healthier and affordable in five years, and open more stores in historically underserved areas.

Though she's taken some unnecessary hits by critics, this is very clearly a huge victory for her campaign. Huge. For years, I've argued that millions want to "eat right", so to speak, but healthy foods typically cost more. If you're trying to save money, many go for what's affordable. That's a fact. So politics aside, Michelle Obama's efforts are making a difference.
Posted by 2morrowKnight's Awesome Blog at 4:42 AM