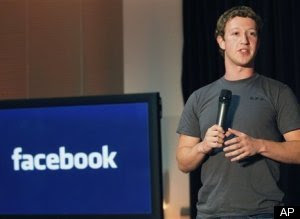 Facebook founder Mark Zuckerberg
Like many of my blog readers, I too was alarmed that Facebook recently adopted (and now "temporarily suspended") a policy of letting app developers have access to users' home addresses and phone numbers. The site has really had its share of privacy issues over the last few years. But while it wants a more open web, users should just make sure that their sensitive information like cell numbers and residential addresses are deleted. You can do that. Found out how to do that here.

I will not join the chorus of people urging others to quit the site. Take Twitter for example. Third party apps can read your private DMs. This is true. These are the kind of things users should know so they don't send sensitive info. You can't totally protect your privacy. Sites know where you're logging in from from, and what operating system you're using.

So quitting Facebook and Twitter is a non-starter with me. They serve a great purpose. Making them better and safer for users should be the ultimate objective.
Posted by 2morrowKnight's Awesome Blog at 4:16 AM