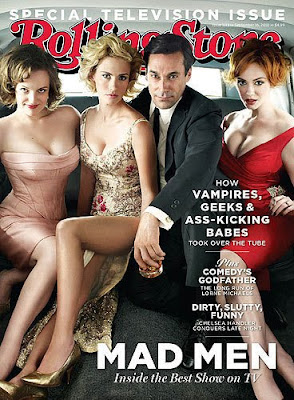 Though I would not call Mad Men the best show on TV (that honor belongs to Breaking Bad), its sense of style is both intoxicating and undeniable. What makes it a great show is the deeply flawed and charming Don Draper, played brilliantly by Jon Hamm.

I've watched many great dramas over the years that were character driven. The Sopranos and The West Wing come to mind. But no show has the strange appeal of Mad Men. On the one hand, its central character, Don Draper, is an empty suit. A man with very little substance. Yet, you feel yourself rooting for him (at least professionally) at every turn.

The show is also situated against the backdrop of the turbulent 1960s: John F. Kennedy, Women's Rights, Civil Rights, the reinvention of American Enterprise, etc. Its a great show that's completely deserving of its success.
Posted by 2morrowKnight's Awesome Blog at 3:50 AM