With a little more than a year after his untimely passing, Michael Jackson may not be physically here, but his brother Jermaine is making sure he will always be with us in spirit. On October 2nd, Jermaine will pay tribute to his brother Michael and the entire Jackson Family at Planet Hollywood in Las Vegas.

This is long overdue...and very exciting.

The Jackson Family is like royalty to me. Their music was the soundtrack of my youth. It got me through my shyness as a kid and helped me impress the girls with my dance moves. It gave so much meaning to my life, and, in a way that I've never been able to explain, it showed me what was possible with my own dreams. 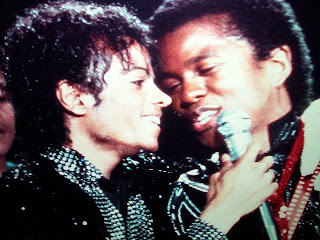 Picture of Michael and Jermaine from the 1980s
I choose to embrace the positive aspects of the singers and musicians I grew up with. Michael Jackson is no different. His Off The Wall album is my all-time favorite. It came out in the disco era, but helped usher in a new sound for the early 1980s. His videos made MTV a worldwide phenomenon, and his corporate partnerships laid the foundation for future celebrity endorsement deals.

Yes, I'm sure the tribute will be quite emotional but also well-received. Complemented with an 11 piece band and vocals from younger members of the family, Jermaine will see to it that the genuis and legacy of his brother Michael is honored with respect. He will be remembered the way he should be: devoted father, world citizen, supporter of charities, and most of all, the thriller.
Posted by 2morrowKnight's Awesome Blog at 1:07 PM