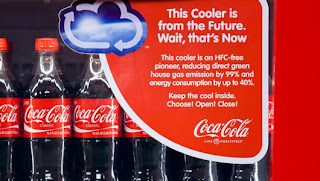 Awesome! This is the type of forward-thinking, visionary creations we need to see more of: "a vending machine that chills soft drinks, and may in turn cool the planet."

The Coca-Cola Company is has pledged to replace its conventional vending machines with ones that are more friendlier to the environment. As it turns out, a lot of vending machines use hydrofluorocarbons (HFCs) which can cause more harm to the environment that carbon dioxide (CO2). I have to applaud Coca-Cola for doing this. Green activists and organizations have pressured lots of global companies to change their practices. And rather than do something in increments, they came out in a bold way.

And it seems other companies have taken notice. According to Mature Mother Network,

PepsiCo installed 35 new, HFC-free vending machines in Miami just in time for the Super Bowl. These utilize hydrocarbons — think propane and butane — refrigerants already popular in Europe. Ben & Jerry's ice cream company is launching its own version of this technology at stores in the Washington, D.C., and Boston areas. Meanwhile, General Electric is seeking approval to sell home-use refrigerators in the U.S. using a hydrocarbon refrigerant.

This is huge. I hope even more companies recognize the benefit of making their products climate-friendly.
Posted by 2morrowKnight's Awesome Blog at 11:54 PM