Raising Money for Leukemia, one Mountain at a Time

Mountains have always been powerful metaphors for facing the unknown, overcoming obstacles, and conquering our fears. World class adventurer Paul Steele views mountains as opportunities to raise money for charity, and, to spotlight notable causes around the globe. On January 16th, he embarks on his most ambitious endeavor to date: climbing Mount Aconcagua (the highest mountain in the western hemisphere and the highest outside Asia) to raise money for The Anthony Nolan Trust, a UK charity well known for its emphasis on leukemia and bone marrow transplantation.

Steele’s original target was £5000 (approximately $8000), but he has more than shattered that goal. A popular and beloved figure on Twitter, he has brilliantly used social media promote his activities. His planned trek has captured the attention of people on every continent, and inspired many (this writer included) to make a climb with him as he takes on the Himalayas in 2011 with a Twitter team of explorers. 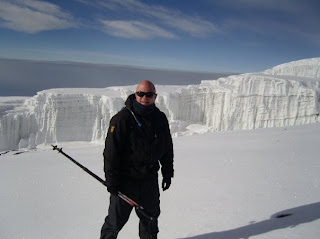 His impending hike up Mount Aconcagua (standing at 22,841 feet) will be met with conditions that are as ferocious as they are unforgiving: periodic storms; frostbite and altitude sickness, and, the infamous white wind. But this is Paul Steele: a man with the heart of a champion, and the passion and drive that no mountain can contain.

Steele has turned his love for our planet into a great way to raise needed funds for an important cause. The Anthony Nolan Trust has impacted his life more than once, so this is an incredible, thoughtful way to show gratitude. During a time when charities worldwide are struggling, this amazing adventure stands as a great example of what can happen when you marry a worthy cause with the worldwide reach and power of social media.

To read more about Paul Steele's inspiring climb for charity, read the official Aconcagua For Leukemia blog, or simply connect with him through his Twitter feed.

Posted by 2morrowKnight's Awesome Blog at 6:05 AM