According to Inhabit.com, Taipei 101, one of the world’s tallest buildings, is seeking eco-cred. It is making lots of upgrades in an effort to become the “World’s Tallest Green Building.” Located in Taiwan, the building is going through $1.8 million in energy efficiency upgrades (a move that will save it $20 million annually). 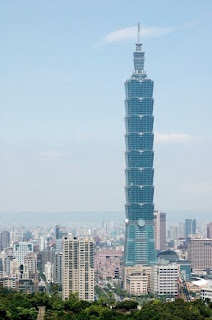 Skyscrapers here in The United States have made similar moves. The Empire State Building and the Sears Tower started making some well-needed eco-upgrades earlier this year. Hopefully this becomes a trend with skyscrapers on every continent. No matter what happens though, this is going to be a tremendous shot in the arm to the unstoppable, and necessary Green Economy.

Bravo to Taipei 101 for saving money, creating jobs, and doing something awesome for the environment.
Posted by 2morrowKnight's Awesome Blog at 5:10 AM