Why I am Climbing Mount Kilimanjaro in 2-3 Years

I've always wanted to climb Mount Kilimanjaro. And now I've made a promise to myself to make the hike. It won't be for a few years, but its a journey I have to take. Why? Because it's snow may soon be gone. In today's Huffington Post Green Section, an article about Kilimanjaro's rapidly disappearing white peak:

Some 85 percent of the ice that made up the mountaintop glaciers in 1912 was gone by 2007, researchers led by paleoclimatologist Lonnie Thompson of Ohio State University report in Tuesday's edition of Proceedings of the National Academy of Sciences. And more than a quarter of the ice present in 2000 was gone by 2007. 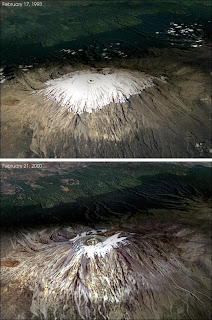 But this is not unique to this great mountain. Other peaks around the world - Mt. Everest, Mt. McKinley, Mt. Hood, etc. - have witnessed a reduction in snow the last couple of decades. This means we desperately have to find a solution to the global problem of climate change.

I'm climbing Kilimanjaro in a few years because if I wait until the later part of the next decade, I fear there might not be any snow to see.
Posted by 2morrowKnight's Awesome Blog at 8:11 PM