A part of me can't really believe it. The Weather Channel has such a winning formula. They've tinkered with it from time to time, but it's pretty consistent. In fact, it is the highest rated station on cable. The only reason for this is to generate more revenue - as if they need to do that. 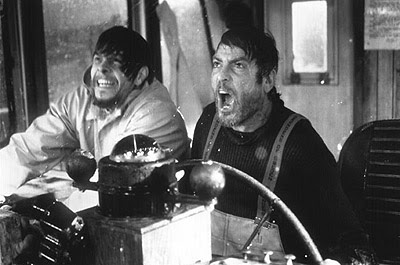 According to the Associated Press, the first movie will be The Perfect Storm. Then, we'll see movies like March of the Penguins, Deep Blue Sea and...Misery. Why Misery? Because James Caan's character got stuck in a snow storm at the beginning of the movie. Okay, I guess. So I'm sure we'll be seeing Volcano, Dante's Peak and The Day After Tomorrow.

But while this sounds intriguing, if the Weather Channel executives are going to go down this path, why not go the distance?! You know what I mean: go wa-a-y back to the 70s and air those cheesy disaster movies like Earthquake and Meteor. As they say on MTV, "hook it up baby!"

The Weather Channel is in a class by itself. It brought sexy back to saying weather-related phrases: "Barometric pressure!" "Scattered thunderstorms!" "Yes, those are south easterly winds blowing your hair right now you fine thing!" That sounds good coming from a Weather Channel anchor. But now it won't be the same anymore because the station wants to be like FX, TBS and TNT. Well, at least I can look forward to seeing the movie Cloudy With a Chance of Meatballs which is sure to come on right after the next accu-weather forecast. LOL!

Posted by 2morrowKnight's Awesome Blog at 3:27 AM