According to The Daily Galaxy, more than 300 planets have been discovered outside of our solar system. Most of of these planets are "Jupiter-sized planets that would dwarf the Earth and are almost certainly lifeless", but a few weeks ago, astronomers discovered a rocky planet named CoRoT-7b. This planet has a density that's similar to earth's, and it's 500 light years away.

Finding a "second earth" would be even more exciting than the mars explorations of the last 30 plus years. As a kid, I remember the national excitement when the Viking 1 and Viking 2 landers beamed backed pictures of the desolate, rocky, red Martian surface.
A Viking 1 picture: 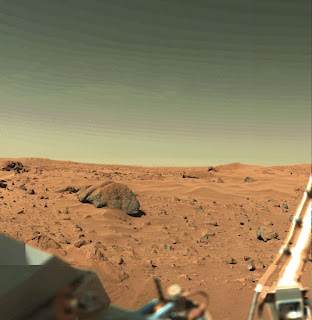 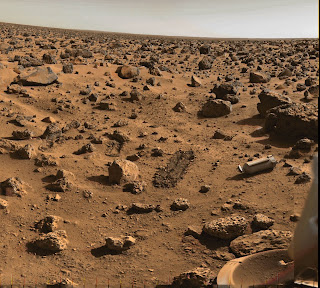 And who can forget the journeys of the two Mars rovers, Spirit and Opportunity. They operated much longer than NASA scientists had predicted, and they've given us some great photos - photos markedly different from the two Viking crafts of the mid to late '70s.
So there's a lot riding on finding a "second earth". NASA is on a roll! The explorations of Mars have been a smashing success. But I want a second earth because the Star Wars fanatic in me wants to see if there really is a Yoda, Boba Fett, Han Solo, and R2D2. Here's hoping baby!
Posted by 2morrowKnight's Awesome Blog at 2:32 AM