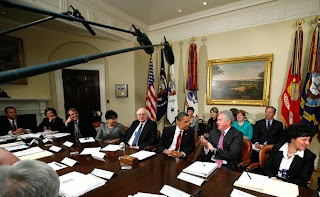 Photo by Alex Wong/Getty Images Europe
President Obama and his economic recovery advisory board (pictured above) have done a very good job thus far. Not excellent, but very good. And according to the New York Times, they're considering additional strategies to generate more jobs. Clearly, as both the USA Today and the ultra-conservative Wall Street Journal have admitted, the $787 stimulus has worked. But more needs to be done on the jobs front.
In an awesome analysis published in the Huffingtonpost business section, economist Reich offered this assessment to generating more jobs. Here are his four recommendations:

1. Use existing authority under both the stimulus package enacted earlier this year and the nefarious TARP bailout fund -- extending and combining them into a fund to make up for state and local cuts in public school budgets, childrens' health, public health (we need workers to administer swine flu vaccine) and public transportation. Instead of bailing out banks and giant automakers, we should switch to bailing out public services that average people need.

2. Propose a one-year payroll tax holiday on the first $20,000 of income. Republicans as well as Blue Dog Dems could go along with this, and it would be a highly progressive tax cut since 80 percent of Americans pay more in payroll taxes than they do in income taxes.

3. Give small businesses a "new jobs tax credit" for every net new job created over the next year. Granted, under normal circumstances this sort of jobs credit doesn't have much effect, and it's difficult to separate hires that would have happened anyway from net new ones. But we're not in normal circumstances; small businesses, which are responsible for most new jobs, still aren't hiring. They need a boost.

4. Dramatically expand the Small Business Administration's lending programs and have the Fed buy up the SBA's debt. Big banks are not lending to small businesses. TARP has been an utter failure in this regard. The SBA and the Fed should circumvent them and help small businesses get the capital they need, so they can start hiring again.

Robert Reich is on to something here. He knows that more jobs are coming. This is a fact. The remaining 60% of the stimulus will create jobs over the next 14 months. The impending climate bill will create millions of new energy sector jobs. But something more dramatic needs to be done in the short term.
Yes, our economy is recovering. We are losing less and less jobs with each passing month. But a "jobless recovery" is a non-starter. So I look for Obama and his economic advisors to roll out something else before November. And even more will be rolled out directly after the holiday season.
Stay tuned.
Posted by 2morrowKnight's Awesome Blog at 3:01 AM