Yes, I am very happy for President Obama. He was given the unenviable task of repairing America's broken image with European allies, and with the heads of emerging nations. Yes, it's still early, but here's the truth: in 10 months under Obama, America's image in the world is decidedly better than it was under the previous president.

This is not supposition, but fact. International and regional polls confirm this.

And how has Obama done it mostly? With "soft power" - this was sorely lacking in the "hard power"-heavy approach of President George W. Bush. The world was certainly impressed with Obama's great inaugural speech, and his powerful declaration: "...we will extend a hand if you are willing to unclench your fist." These are not the words of a pacifist, but in fact, a peace advocate. 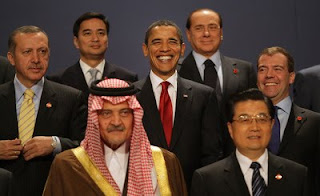 But even more compelling is this assertion: America should be honored by Obama's Nobel Peace Prize because we elected him, and his diplomatic and measured approach is what clearly impressed the Nobel Committee.

Some of his critics claim that he only won because of his soaring speeches, and not his accomplishments. This is a ridiculous claim. I see people have forgotten Huffpost Blogger Ilan Goldenberg's awesome post on Obama's 100 foreign policy achievements in just his first 100 days. So this madness about "what has he done" must stop.

As for Obama's words...every fight for human dignity is imbued with impassioned words. Susan B. Anthony's words provided momentum to the women's suffrage movement. Martin Luther King's words provided momentum to the civil rights movement. Anthony and King were beaten, spit on, ostracized, jailed, and demeaned in the mainstream press. But their words (speeches, books, letters, and protest chants) provided the spark and lasting sustenance for the movements of which they were apart.

After all, many of these "country first" activists cheered wildly when Chicago lost the Olympics, and they have been absolutely disgusting in attacking Obama for just about anything.

Consider this: our president and his family receive over 30 death threats a day (a day!) yet that hasn't shaken the Obamas' belief that we live a great country. Those town hall meetings and Tea Party gatherings had nasty conspiracy theories and ugliness from many right wingers, but Obama still believes in bi-partisanship and reaching out. Yes, still, after all of that. Clearly, this is a man of peace - both nationally and internationally. Again, not a pacifist, but a peace advocate. He wants the people of the world to work together, for the people of the United States to work together, and I can't say I disagree with him on that.

I see his award as a recognition of what he has worked very hard to do globally (and succeeded to a degree), and, a push for him to go even farther, and achieve even more. So it doesn't say "Obama has arrived" as much as it says "Obama is on the right track". Our president earns his keep every minute of the day, and we must make sure it continues. Arianna Huffington wrote in January that Obama wasn't the only one being inaugurated - that we all are. Likewise, Obama didn't just win the Nobel Peace Prize - we all did. I am happy that we all - in this multi-ethnic, multi-racial nation - share this incredible honor.
Posted by 2morrowKnight's Awesome Blog at 6:20 AM