Official White House Photographer Pete Souza has taken some very cool pictures in the very young presidency of Barack Obama. The Huffington Post Style Section always has the best photos, and the ones from the White House are always great. These two below jumped out at me because their private moments. The first is with President Obama and close friends and associates viewing filmmaker Ken Burns' recent National Parks documentary - which is awesome by the way. And the second shows him and his youngest daughter Sasha viewing the Jefferson Memorial. 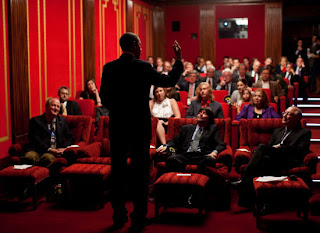 President Barack Obama hosts a screening for the PBS documentary on the National Parks at the Family Theater at the White House, Sept. 17, 2009. (Photo by Pete Souza) 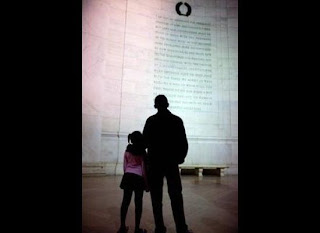 President Barack Obama and his daughter Sasha at the Jefferson Memorial, Sept. 27, 2009. (Photo by Pete Souza)
Posted by 2morrowKnight's Awesome Blog at 6:50 PM