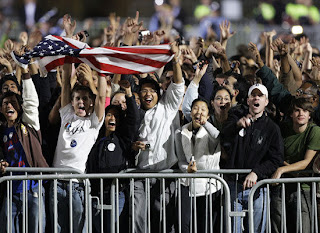 You sort of knew it was coming, right? The media talking heads are dusting off the 1994 playbook. You remember the story quite well: a young president and his party are soundly defeated in the midterm elections. It sounds really good, but it ain't gonna happen this time.
It's hard for many people to believe this when many pundits are just salivating over the remote possibility that the wheels can come off President Obama's ambitious agenda. Yes, some of the talking heads are hoping for an Obama implosion and for the Republicans to take back control of congress to create the drama and intrigue of divided government. But I just don't believe it's in the cards.

And no, this is not wishful thinking on my part. This is not supposition and conjecture, or simply a baseless assertion from an Obama supporter trying to rally the troops. Trust me: 2010 will not be a repeat of 1994. Here are 4 reasons why:

Demographics - President Obama won African-Americans, Latinos, Asian-Americans, Arab-Americans, and Native-Americans. He also trounced John McCain by roughly 40% with young voters. This is stunning. But what is even more jaw-dropping is how well President Obama did with young white voters, particularly young white women. Think about it: Hillary Clinton had her daughter Chelsea and John McCain had his daughter Meagan, but they didn't make a big dent. So it's easy to see why some conservative white parents didn't want their children to see President Obama's back to school speech. He remains uber popular with most white youth, and, according to a major poll this Summer, with younger Americans in general. This can only be a positive development for 2010 and 2012.
The Economy - President Obama inherited a huge mess. The economy was tanking badly upon his arrival. But it would have been worse without the $787 billion stimulus bill. Period. The proof is in the pudding: it helped reduce GDP shrinkage in the third quarter and boosted consumer spending (great signs for the overall economy). The USA TODAY examined data that shows how stimulus cash has lifted Blue & Red States alike, and has offset a major drop in tax collections. And if that's not enough, the ultra conservative Wall Street Journal recently admitted that the stimulus (which they campaigned against) is helping the U.S. climb out of the current recession. And don't look now, but when Obama signs the impending climate bill into law, hundreds of thousands of Green jobs will be created. Around this time next year, Obama and the Democrats will be staring at a much stronger economy.

The Tea Party - Ideological disagreements are one thing, but the ugliness and hysteria at Tea Party gatherings are something else all together. These birthers, deathers, and anti-immigration zealots desperately need to reclaim their Shpadoinkle. I don't have to give a list of examples about their vitriol because we've all witnessed the outrageous posters and criminally irresponsible rhetoric from Tea Party organizers and participants. Is it any wonder why President Obama has seen a 400% surge in death threats, and that Speaker Pelosi is warning of potentially serious political violence? Tell me how any of this helps Republicans? It doesn't.
And...President Barack Obama himself - He ran the most efficient presidential campaign anyone had ever seen. Remember his TV channel? Remember his advertisements in video games? Remember his under radar outreach to young white evangelicals in '07 that was laughed off? Yes, he rocked it. What man could deliver the most electric concession speech I've ever heard that was later turned into a runaway viral hit? The same man who delivered a riveting speech to 80,000 in Denver at the Democratic National Convention. You think all of that ingenuity, energy, and out of the box thinking has disappeared? President Obama is just getting warmed up. Remember his groundbreaking appearances on The Tonight Show, ESPN's' "March Madness/Bracketology" segment, and Univision's popular music show Premio Lo Nuestro back in the Spring? He rocked it. This Sunday, he is going to appear on five talk shows. And he will visit David Letterman - the King of Late Night - on Monday to reach slices of the American public that are not presently tuned into the cable news noise of lies and distortion. Oh, and about what he's done in office...as of today, he's signed 13 bills into law, including the Lilly Ledbetter Fair Pay Act, Children's Health Insurance Reauthorization Act, and the National Service Bill. Yes, Obama is still the best asset the Democratic Party has.
Taken together, this 2010 scenario is very feasible. But the factors I outlined must be married to the voter education/registration, traveling, e-mailing, phone-banking, and retail politicking that made it all happen in the first place. With so much at stake, we must remember that "Yes We Can" is not just a feel good slogan, or even a destination. In fact, it's an ongoing journey for something better than what we presently have: affordable health care, common sense education reform, stronger environmental protections, etc. So don't let your enthusiasm and resolve about the 2010 elections be sidelined by the ridiculous utterances of the usual suspects of punditry.
Posted by 2morrowKnight's Awesome Blog at 12:48 PM