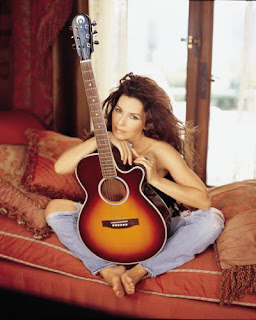 It's great to see Shania Twain back on the scene. I've always appreciated her candor about the changes and shifts in Country music. I remember her confronting the criticism about her more mainstream sound from Country music "purists". Her sultry image was also attacked. But it was just folly. Country music crooners Rascal Flatts have faced the same baseless attacks because their music is also supported and embraced by mainstream audiences.
On VH1 several years ago, Shania addressed her detractors by invoking Country music's central and powerful metaphor: the farm. She artfully said that the farm has gone through changes. And she's right. Maybe a widow is living alone raising her kids alone on the farm, and maybe the female owner of the farm wants to go shopping in Beverly Hills for a day. Country music shouldn't have one sound, but many sounds, because, as Shania proves, its comprised of so many different realities beyond the narratives that many fans are used to.
So happy Shania has re-emerged in a strong way. Her road to stardom and success reveals a great story. Indeed, her great musical perspective has been sorely missing.
Posted by 2morrowKnight's Awesome Blog at 8:36 AM