Stephen Colbert to Play The Riddler? The Momentum Builds! 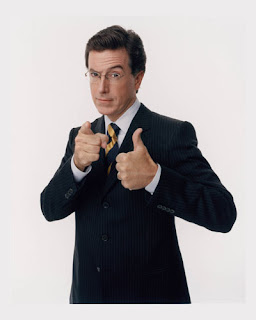 Since Tuesday September 1st, I have received a steady stream of emails about my Huffington Post piece on why Stephen Colbert should play the Riddler in the upcoming Batman movie. It's pretty clear that my recommendation resonated with Colbert Nation.
But that's not even the best part of the story.
Stephen Colbert, yes, the man, the myth, the legend, linked my post to the front page of his Colbert Nation site. Wow. I literally fell out of my chair. And apparently, the notion of Colbert as the Riddler made such a strong impression with some bloggers and journalists that it was also linked to entertainment sites like The Internet Movie Database (IMB), Showhype, Daylife, Mahalo, WhoRepresents, Newsrunner, and, even quite a few Twitter feeds.
Yes, I am dead serious! A man of tremendous intellect should play The Riddler. Tell me that's not Stephen Colbert. You can't, because deep in your heart, you know Colbert's got the complete package of comic timing, creativity, audacity, and that indefinable "it" to pull off a portrayal of such a multi-layed villain.
We know Stephen Colbert as a brilliant comic, using his expansive reservoir of humor to slash through the endless political spin. But, he's also done some truly riveting dramatic work on shows like Law & Order. Colbert's powerfully versatile resume is proof he can play The Riddler. Such a character is best suited for Colbert because he can give dimension to the Riddler's almost Shakespearean existence and high-octane brilliance.
Can't you see Cobert's Riddler getting hot & bothered with The Catwoman, or battling Batman in duel after duel all over Gotham City? Yes, you can. So join me in urging Warner Brothers to select Stephen Colbert as The Riddler! Ticket sales would go through the roof!
For more context, read my post: Riddle Me This: Why Not Let Stephen Colbert Play the Riddler?
Posted by 2morrowKnight's Awesome Blog at 8:44 AM