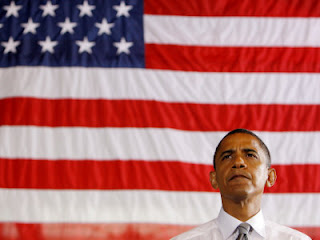 Since CNN is planning a blockbuster live special on August 6th to grade President Obama's 2nd 100 days, I figured I would weigh in with my own report card. As many of my readers know, I was a volunteer internet strategist for President Obama, and loved every grueling, challenging, sleep-deprived moment. On election night and during the inauguration festivities, I thought to myself: "all of the traveling, e-mailing, phone-banking, and retail politicking had paid off."

Yes, I campaigned vigorously for President Obama, and I like what he's done thus far. This is reflected in my assessment of his first 100 days, which I regard as a smashing success. To paraphrase MTV lingo, yeah baby, the president rocked the house! And make no mistake, he's still riding high in his 2nd 100 days. Though the series of economic challenges (dropped in his lap from his predecessor) has pushed his high marks down a couple of notches.

When my 5 grades below are averaged, it comes out somewhere between an A- and a B+:

THE ECONOMY (Grade: B) - Let's be clear: President Obama inherited a huge mess. The economy was tanking badly upon his arrival. Though there is some light at the end of the tunnel, job losses still persist in many quarters. But it would have been worse without the stimulus. Period. Obama's Stimulus Package helped reduce GDP shrinkage in the third quarter (a great sign for the overall economy). Furthermore, the positive, job creating effects of the Stimulus have been praised by Democratic Governors like Christine Gregoire (WA) and Republican Governors like Jan Brewer (AZ). Even the USA TODAY had an article that examined data that shows how Stimulus cash has lifted Blue & Red States alike, and has offset a major drop in tax collections. Yes, believe the hype: the Stimulus is working. More work has to be done, but things look promising.

DOMESTIC POLICY (Grade: B) - Never in modern history has a president had to grapple with so much, so soon in his first term: soaring foreclosures, high unemployment, extension of unemployment benefits, bank reform, the environmental issues, and now an overhaul of the health care industry. But he's doing a very good job at multi-tasking. He has signed bills on pay equity for women, free health care for 11 million kids, as well as more aid to homeowners trying to modify their mortgages and small businesses trying to stay afloat. I look for green jobs, immigration and gay rights to dominate a lot of his agenda next year.

FOREIGN POLICY (Grade: A-) - Say it loud: "America is back!" It is clear that the global perception of our country has improved greatly. Polls reveal that since Obama's inauguration, America is seen less as "arrogant & self-centered" and more as "thoughtful and conciliatory". President Obama has a great deal to do with this. His visits to Europe, Asia, Africa, and Latin America have helped tremendously. But the successes are accompanied by two headaches: the regimes of Iran and North Korea. Both countries are experiencing great internal changes that could affect the stability of their regions. Also, another perpetual headache looms: a potential re-escalation of the Israeli-Palestinian conflict, particularly if the peace process doesn't resume. But I trust Obama’s diplomatic team, headed by Secretary of State Hillary Clinton, because they've been great thus far.

OUTREACH TO REPUBLICANS (Grade: A) - As I wrote in late May, Obama has serious Red State credibility. He has Republicans in his Cabinet. He has nominated Republicans to Ambassadorships. He has Republicans like General Colin Powell as unofficial advisors. And lest we forget, President Obama has consistently reached out to Republicans on bill after bill, though the vast majority continues to vote against legislation he champions. Outreach to Republicans may not win his kudos with most of Red State America, but it continues to keep his numbers with independent, politically unaffiliated voters high.

COMMUNICATION (Grade: A) - President Obama has the most well-oiled communications apparatus in the history of American politics. He has made good use of the explosion of the New Media landscape that includes social media giants like Twitter, Facebook, and Myspace. He has also used Old Media more effectively than any president I've ever seen. MSNBC's Lawrence O'Donnell was right to label him the greatest presidential communicator of the television era. His television speech delivery is smooth and seamless. His town hall meetings are high-energy and his answers are very detailed. He is on message, all of the time, 24/7. If this isn't a blueprint for success, I don't know what is.

Now, let me be clear about some things: I have no illusions about what it's going to take to achieve meaningful change in this country. It is going to be a long hard slog. Yes, it’s going to take serious work, so it makes no sense for citizens, pundits and journalists to apply the "Fast Food" model to expectations about Obama's Presidency. Just because we get chicken mcnuggets in 5 minutes doesn't mean we'll get robust job growth in say, 5 days, or 5 weeks. Things take time.

I do have disagreements with President Obama. However, I'm not in his position, nor am I walking in his well-traveled shoes. He has so much on his plate. With the avalanche of daily hate mail and assasination attempts he and his family get through postal mail, e-mail, and even phone calls, it's a wonder he gets anything done. But he has signed 12 bills in six months, the most by a first term president since FDR in the 1930s. He's been busy.

I'm confident President Obama will turn the economy around, and help us trailblaze new, unseen paths to greatness. Oh the possibilities.

Posted by 2morrowKnight's Awesome Blog at 4:14 AM