No, not My America, you mean Our America 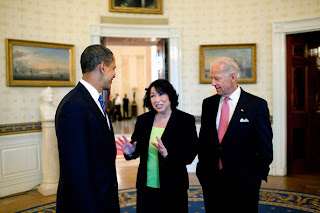 I must admit, I have intentionally stayed away from commenting on the shameful and criminally irresponsible attacks on President Obama since inauguration. To call them disheartening would be an understatement.

One of the most incendiary and obvious attacks on the President has come from some recent town hall participants across the country: "I want my America back," they shout. This my America statement is utterly disgusting. No need to expound on it because it's become very clear what the statement means.

To all those mouthing this ridiculously coded crap, I offer an alternative view: America's racial and ethnic diversity is what has made this country rich, incandescent, and beautiful. Yes, there are different perspectives, different views, and different prescriptions for alleviating America's problems. Yes, many people, but one country. Not just my country, but our country.

I am member of one of the oldest black families in North Carolina, dating back to a plantation from the mid 1700s. But why am I any more American than recent immigrants from Mexico, Vietnam, Iran, Uganda, or Poland? The notion is ridiculous. America is continuously evolving, and it's our responsibility to adjust and adapt to some of the changes...in our America.

Barack Obama is the first in a long chorus to follow. What do I mean? I mean that in this half of the twenty-first century, a woman, an Asian-American and a Latino will sit in the Oval Office. Believe it. I see Arab-American and Native-American governors. And, I wouldn't be surprised if President Obama names an Asian-American to the Supreme Court - namely Gary Locke, who is America's only elected Asian-American Governor, and is currently Obama's Commerce Department Secretary. Additionally, there will be more white lawmakers (like U.S. Rep. Steve Cohen) representing mostly non-white cities and/or congressional districts. These are just some of the sweeping changes that we'll be witnessing in our America.

So rather than wage a losing fight against impending social and demographic changes, it is incumbent upon people to go beyond their communities, and to get to know the residents of other communities. I know that's easier said than done. But don't tell me it's not possible. Simply tolerating people is so my America. Moving forward, we need to value people more, which is a necessary ingredient to making our America work.

America doesn't revolve around any one group of people, and no one racial or ethnic group exclusively defines what it means to be an American. I wholeheartedly believe that. We all contribute.

I don't want to be misunderstood or misquoted though. I am not saying that racism, sexism, ethnic bigotry, and religious hatred will subside just because we reach out to each other. They won't subside. The idealist in me will still speak out against it, but I know its not going anywhere. We can't obliterate any of that, but, we can make sure that none of it obliterates our country. Yes, say it with me folks: our people, our country, our America. Got it?