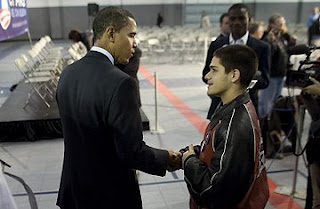 Once again, the mainstream media refuses to report on a huge poll about young people, and their views on President Obama. On June 19th, a Zogby/Scoop 44 poll found that 70% of young Americans say President Obama's promises of change match his actions. To my knowledge, no network or cable news station reported on this, or brought any young people on to discuss it.

What is significant about this poll? Plenty. It shows that a commanding majority of young people (ages 18-24) believe President Obama is working hard to keep his promises, and that the quantity and quality of his policies has been impressive. In fact, 43% of young Republicans in the poll agree President Obama is doing a great job. And this isn't big news? This is huge.
It's hard not to believe that the mainstream media has learned very little from the presidential election. Remember the big laughter from journalists and pundits, who repeatedly mocked Obama Campaign predictions about young people being engaged in the issues, and how they were going to vote in numbers not seen since the 1960s?
Obama proved them wrong. He won young white evangelicals. He won young Asian-Americans and Latinos. He won the young vote by nearly 40% over rival John McCain. Young people know that Obama increased the amount of available financial assistance to college students, and expanded the amount of opportunities college graduates can utilize to serve their communities and pay off their financial aid. Young people know about the Lily Ledbetter Bill ("pay equity for women"), the Children's Health Insurance Act ("free care coverage for 11 million kids"), and the 10 other bills President Obama has signed into law.
A majority of young Americans like what they hear and see from this president. I wonder why this is not apart of the broadcast media conversation taking place about the president's policies. The pundits replay over and over again Comedian Bill Maher's recent over-the-top rant about Obama needing to "do something" (and ridiculously comparing him to Lindsey Lohan), but can't report on a poll of young Americans under 30, who would vigorously disagree with Maher, and think Obama is doing just fine? Wow.
The mainstream media still doesn't consider Americans under 30 to be a political force, or a constituency worth reporting on in rich detail. And that's too bad.
Posted by 2morrowKnight's Awesome Blog at 12:35 AM