5 Ways to OBAMA-fy Your Career 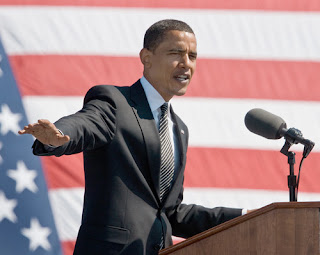 President Obama has created a leadership model that will be studied, analyzed, and imitated for years and decades to come. I was a volunteer Internet strategist for his campaign, so I can attest to its efficiency.

In the worst global recession since World War II, workers from Atlanta to Auckland, and London to Lagos, are looking at President Obama's character traits and decisions in the hopes of trying to hold on to a job they already have, or to increase and expand their career options. Below are 5 things President Obama did to elevate his chances of winning The White House, and that you can do to improve your job prospects:

BE PERSISTENT
In late 2007, commentators were openly doubting President Obama: he was behind in the polls, and he did not have serious name recognition and big money donors like the other top candidates. And besides, his full name, Barack Hussein Obama, was being viciously mischaracterized in a now infamous and discredited "Who is Barack Obama" email hoax. But he would not let any of that crush his dreams, sap his enthusiasm, or cloud his vision.

USE YOUR STRENGTHS
President Obama is an incredible communicator. Yes, he is a great speaker. But it goes far beyond that. Day after day, he made phone calls, sent emails, convened house parties, knocked on doors, and shook hands. Also, he tapped into his strength as a trained community organizer, which helped his campaign register record numbers of voters in unlikely places like restaurants, barbershops, beauty salons, and sporting events.

BE A GOOD LISTENER
President Obama hears all points of views before moving on an issue. He could have ignored ideas by Congressional Republicans on issues like the Recovery and Reinvestment Act. But he met with them, listened, and ended up adopting some of their ideas. Yes, President Obama has well-defined positions, but he's not rigid or inflexible, so listening to other people's perspectives could force him to adjust or evaluate his own.

USE SOCIAL MEDIA
President Obama effectively used social media to combat lies about his background, distortions about his record, and his vision for the future. And it worked like a charm. He developed pages on general sites which can be seen here: Twitter, Myspace, Facebook, YouTube, LinkedIn, and Flickr. Moreover, he made a strong play for key groups and demographics when he opened accounts on Eons, AsianAvenue, Migente, Faithbase, Glee, and Blackplanet.

VALUE A DIVERSE WORKFORCE
President Obama had the most diverse presidential campaign staff in history. He follows that up with having the most diverse administration in history. Yes, in terms of race, ethnicity, and gender, but also religion, sexual orientation and geography. Indeed, he values a presidential staff that works for the people, cares for the people, and, looks like the people. In a country more and more diverse everyday than the previous day, getting used to a diverse workforce is a necessity.

Now focus on that career, determine what you need to do to obtain it, and then make it happen. Yes you can!
Posted by 2morrowKnight's Awesome Blog at 12:07 PM