Riddle Me This: Why not let Stephen Colbert Play...The Riddler? 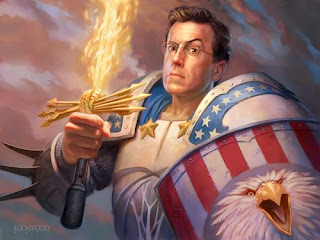 With the late Heath Ledger's academy award-winning turn as The Joker, studio heads at Warner Brothers are reportedly giddy about the prospect of hitting a home run with another villain in the next Batman sequel. I believe that villain should be The Riddler, and I believe comic and pop culture icon Stephen Colbert should play him.

Yes, Stephen Colbert. (I'm serious, and I'll explain why in a minute). But of course, many at Warner Brothers have someone else in mind: Johnny Depp. Yes, I can see why many see him as an attractive choice. He gave incredible dimension to the deliriously enjoyable Jack Sparrow in The Pirates of the Caribbean franchise, and, he has delivered some memorable performances in brilliantly macabre, Tim Burton-directed movies like Sleepy Hollow and Sweeny Todd. He is truly a force of nature!
But indulge me for a moment: the Riddler is not just any villain. As long as he can describe it in a riddle or puzzle, he views it as a crime worth committing. He doesn't kill his opponents when he has the upper hand. Like say, Jigsaw in the Saw movies, he has to put them in a deathtrap where he creates a life and death intellectual challenge they cannot possibly solve. And though Depp could do it, Stephen Colbert would give the role true justice.
The Riddler is intellectually curious, wickedly funny, and relentlessly creative - all of the things I would associate with Stephen Colbert. Add in the usual debauchery, mischief and shenanigans and Colbert could really pull it off. I know this is a lot to chew on for some. But he has fooled a lot of conservatives into thinking that he's one of them, and, recently did a rap battle with RNC CHairman Steele about conservative values - a side-splittingly funny bit that should win him another emmy award.
As a serious comic book enthusiast and collector, I take my Colbert recommendation seriously. I have thoroughly enjoyed, and celebrated the casting of Christian Bale as Batman. He takes the franchise to another level. And, if the reports are true, I would celebrate Philip Seymour Hoffman as The Penguin. But most of all, I would cheer for casting Angelina Jolie as The Catwoman. Nobody plays the seductive Vixen persona better than her. But trust me, Stephen Colbert would be devilishly good fun as The Ridler. Think about it.
Posted by 2morrowKnight's Awesome Blog at 4:21 PM