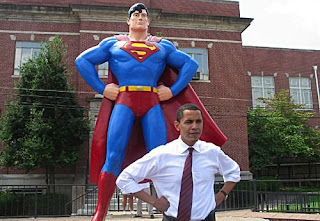 Naysayers and detractors continue to scratch their heads in amazement at President Obama's ability to pull significant Republican support. But if they looked at the president's 13 plus years as a politician, they would see that he's always worked closely and substantively with them. Remember his friendship with Illinois State Senator Kirk Dillard? Though a conservative, he so admired Obama's pragmatic, bi-partisan approach to politics, and his standing as an action-oriented visionary. That admiration landed him an appearance in an Obama TV ad in early 2007.

That is but one example of Obama's clear outreach to Republicans. We can look at his selection of Republicans like Ray LaHood as Secretary of Transportation or Robert Gates as Secretary of Defense for his administration. We can also look at his incredible 50 State Strategy, which had him campaigning in and/or setting up offices in states like Idaho, Montana, Alaska, Georgia, North Carolina, North Dakota, and Nebraska. A more recent and dramatic example, however, is his naming of Gov. Jon Huntsman as the new Ambassador to China.

This one is awesome. Why? Well, Huntsman has a very impressive record on international affairs, and, he speaks mandarin Chinese from his days as a missionary, so he's perfect. Also, by most accounts, Huntsman has been a very good Governor of Utah, which is literally America's Reddest State. Utah resident and progressive blogger Bryan Young wrote a piece in the Huffington Post that all but confirms this. He described him as "level-headed, even-handed, well read, and well respected". He continued:

"...[Gov. Huntsman's] not afraid to veto the idiotic bills brought to him by a legislature that by and large has only a tenuous grip on reality. He's even worked hard to liberalize the liquor laws that have strangled tourism (as well as my social life) in the state, against the will of his party and a majority of his supporters, simply because it's the right thing to do. He's vetoed a lot of legislation that's come across his desk and has one of the most progressive records on the environment in the west... He's even come out in support of civil unions for same sex couples... Add to that, the fact that he's actually kept Utah's head largely above water through the economic crisis and you'll agree that he's actually a pretty good Governor... It's no wonder he was tapped by the Obama team for any job and he deserves our support and encouragement... He really is a stand-up act."

Being associated with yet another moderate, centrist Republican allows President Obama to continue occupying 65%-70% of the country in poll after poll. These types of approval ratings give President Obama a powerful consensus for most of his policies. Huntsman only helps to solidify his numbers.
Huntsman's appointment may not play well with self-styled "true progressives", but for most Americans, he is fulfilling his role as "President of the United States", not "President of particular Democratic constituencies". President Obama is the man: BLUE STATE credentials, for sure, but also...RED STATE credibility!
Posted by 2morrowKnight's Awesome Blog at 12:04 AM