Obama's Shakin' Off Those Haters Baby! 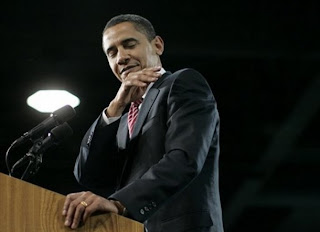 After his sweeping, historic win in last year's election, President Obama promised to be a bridge builder, not a partisan bomb thrower. And he has kept his word. He has Republicans in his administration, and, early in his term, he met with Congressional Republicans to hear their views and ideas. This approach has endeared him to moderate, independent voters who believe in President Obama's strategy: to continue to woo the the small business owner in California and union member in Connecticut who likely supported him, while aggressively reaching out to the evangelical farmer in Montana and supply-side economists in Mississippi who probably didn't.

Yet, on more than one occasion, he's had to shake off the haters. Conservative talk show host Tammy Bruce referred to the Obamas as "trash in the White House"; a Republican Los Alamitos Mayor quits after sending a racist e-mail showing watermelons on the White House Lawn"; and last but not least, Rush Limbaugh insults the President literally every day with his racially irresponsible rants. Interestingly, by not responding to these slights and staying on message with the economy and his agenda, it keeps his poll numbers up sky high, which gives him enormous political capital to pursue health care legislation and other matters. To the average engaged voter, President Obama looks busy, and his detractors look, well, petty and feeble-minded. Who knew that all of this hate would have a reverse effect for Republican officials and give unintended support to President Obama?

So as the hate continues to be directed at him and his family, President Obama presses on and finds a way to make the purveyors of that hate look even more foolish. Watching our president shake off the haters has become thoroughly enjoyable.
Posted by 2morrowKnight's Awesome Blog at 5:04 AM