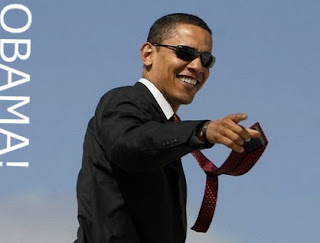 CNBC's John Harwood made a great analogy on the show Meet the Press recently: he likened President Obama's performance to a star quarterback driving the ball down the field getting first down after first down. To put it another way, imagine a game where Lebron James and the Cavaliers or Kobe Bryant and the Lakers hit 3-pointers and slam ducks at will and never ever turned the ball over. That explains President Obama's overwhelming success thus far.

Indeed, President Obama's First 100 Days in office is going down in the history books. Someone might be able to say that they disagree with his policies, but no one can say he hasn't done anything. Most of the of the national polls put him in the mid to high 60% range. A healthy number of respondents in a recent New York Times/CBS News Poll say they have strong confidence in Obama's leadership, and, that they see small signs that the economy is getting better (ever so slightly) with his initiatives.
And yes, OMG!, just last week, President Obama announced that the Recovery Act is "starting to work" and that 2,000 transportation projects are under way around the country: Red States and Blue States. In fact, last week, on The White House Blog, there was a compilation of articles from publications around the country hailing the job-generating success of the Recovery Act. Yes baby...its working. Moreover, President Obama has been inspiring, substantive, engaging, unconventional, and downright transformational. He has signed 7 pieces of major legislation so far, which include: Lilly Ledbetter Fair Pay Act, Children’s Health Insurance Reauthorization Act, DTV Delay Act, American Recovery and Reinvestment Act, and The National Service Bill. He has cracked down on mortgage fraud, worked with the Federal Reserve Bank to lower mortgage rates, and created a very resourceful website (makinghomeaffordable.gov) that comes highly recommended by consumers and mortgage professionals alike.
Furthermore, he has ordered the closure of Guantanamo Bay Prison in 2010; reversed horrendous Executive Orders by President Bush on reproductive rights for women, stem cell research, and environmental protection; and, already, opened up The White House for parties, bi-partisan cocktails, and well-publicized cultural events with community children. Plus, he made groundbreaking appearances on The Tonight Show with Jay Leno, ESPN's" "March Madness/Bracketology" segment, and Univision's popular music show “Premio Lo Nuestro" to raise his profile with millions of viewers who were not tuned into the debate over the Recovery Act and his budget - and it worked beautifully.
But he has been the most compelling in the following areas:
(1) Foreign Policy - Yes, he has taken some lumps on defending some Bush Administration views on warrantless wiretaps, and, yes, Iran, Afghanistan and North Korea (and Palestine) are still evolving toward a solution, but don't tell me that any of that dampens the awe-inspiring impact of his trip to Europe and Asia, where he was the toast of every country he visited. His town hall meeting with Turkish students was the stuff of legends. Need I mention his outreach to Cuba - which most Americans support? And don't get me started over his involvement with the effort to rescue Captain Richard Phillips. Obama rocked it!
(2) Diversity - Simply put, President Obama has stacked his administration with action-oriented thinkers and visionaries (young and old) who care for America, believe in America, and, look like America. Asian-Americans, Latinos, Native-Americans, African-Americans, Arab-Americans, Whites, women, and gays make up the most experienced, pragmatic, and diverse administration in history. Obama refuses to believe there is a contradiction between "outreach" and "achievement". His cosmopolitan hiring is certainly putting pressure on employers in this country who believe they don't have to embrace diversity and can cling to antiquated thinking.
April 29th will mark President Obama's 100th day in office. And so far, he has proven himself to be a thoroughly innovative and pioneering individual, who is complimented by his unflappable and dazzling wife and life partner, First Lady Michelle Obama, and by his phenomenal, social media savvy staff. I wait anxiously for what the next 100 days will yield.
Posted by 2morrowKnight's Awesome Blog at 1:51 PM