The Most Incredible Pictures of President Obama - EVER!

Yes, I said ever. I've seen many awe-inpiring photos of President-elect Obama on his personal Flickr account, but no pictures of the uber photogenic Barack (or B-Rock as I like to call him) are as captivating, or profoundly touching as the ones in the 160 page book The Rise of Barack Obama. To get a peek at the classy black & white photos that fill the book, click here.

Please pick it up, as it will become a serious collector's item. And, because the author/photographer was just selected by Obama's team as The Official White House Photographer.

Below are five more women - women who have been selected for great positions in the Obama Administration, and will help make Obama's vision for transformational change a solid reality for this country. They are: 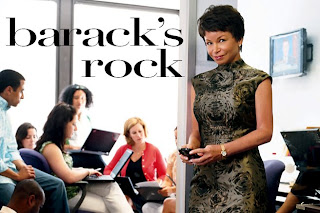 WHY SHE ROCKS: She's known Barack and Michelle for almost 20 years, and will be an authentic voice that Barack knows he can trust. Vogue Magazine's great story on her is right here.
(2) LISA JACKSON, Head of the Environmental Protection Agency (EPA) 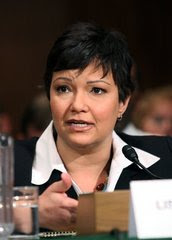 WHY SHE ROCKS: She will likely strengthen environmental regulations, which were slightly weakened under the Bush Administration. She would be the first African-American to head the EPA. Furthermore, she'll be in a position to advise President Obama on the development of millions of Green Jobs that will be a major component of the new frontier of American job creation. Check out more on Lisa Jackson right here.
(3) SUSAN RICE, Ambassador to the United Nations 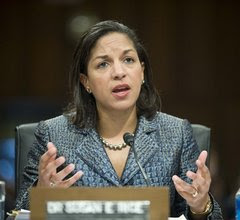 WHY SHE ROCKS: She brings some serious muscle to Obama's Foreign Policy Team. She is an expert on underdeveloped countries, the implications of global poverty and transnational security threats. Her former position as assistant secretary of state for African Affairs (under Bill Clinton) puts her in a position to advise President Obama on African issues like genocide in Darfur. Check out more on Susan Rice right here. 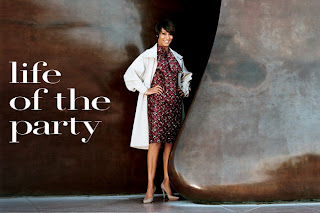 WHY SHE ROCKS: She will be responsible for planning, coordinating and executing social events at The White House. This means she'll be planning state visits and state dinners. Ms. Rogers will also plan activities at The White House designed to connect strongly with the greater DC community. She has the personality and track-record to be one of the best to ever hold the position. Check out more on this Renaissance woman right here.
(5) MELODY BARNES, Director of the Domestic Policy Council

WHY SHE ROCKS: She will be working with likely HHS Secretary Kathleen Sebelius to bring about comprehensive health care reform - something that should help the 40 million plus American with no health care coverage, and millions more who can barely afford their coverage. She will also work on issues such as education, immigration, and criminal justice. She's an impressive woman who has been named one of the 10 best-dressed women in Washington DC - click here. See more about her career by clicking here.
Posted by 2morrowKnight's Awesome Blog at 1:13 AM No comments:

MICHELLE OBAMA’s Beautiful Brown Biceps are Controversial?!! What the #&@k?!! 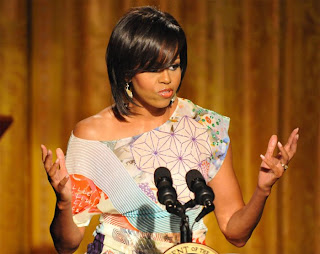 But, the story about Michelle Obama that has gotten the most press is the ridiculous controversy about her wearing sleeveless dresses. Yes, this is true. Mrs. Obama's signature fashion style is being debated by pundits on all the major networks, and is being given the same amount of coverage as the foreclosure crisis.

It is much ado about nothing. If anything, Michelle Obama is continuing a fashion tradition that has been embraced by many first ladies for over two hundred years. First Ladies like Dolley Madison, Marry Todd Lincoln, Mamie Eisenhower, Jackie Kennedy and even Nancy Reagan have shown some skin in the White House. This is all well-known to politicians and journalists. But it didn't stop New York Times writer David Brooks from saying, “Sometimes I think half the reason (President) Obama ran for president is so Michelle would have a platform to show off her biceps.” And even journalist Sandra McElwayne took a disgusting shot at the first lady in an article in The Daily Beast: "with all due respect to her, someone should tell Michelle to mix up her wardrobe and cover up from time to time. I’m beginning to think she has an Arnold Schwarzenegger complex."

It would be easy to dismiss these as the rantings of jealous individuals: jealous of the fact that the Obamas have the discipline to exercise and lift weights every day, and, jealous of the great, loving relationship they have and that so many Americans are now trying to imitate. This is entirely possible. But, I can't help believing that something else is at play here: race. Yes, race.

I believe this flap about her showing her biceps springs from a fear (by some) that millions of white kids will grow up to at least respect the beauty of black women in ways that many books, magazines, tv shows, and movies have failed to do. Michelle Obama has broad hips, full lips, and dark chocolate skin - which is not exactly the portrait of "ideal beauty" American mass media likes to promote. Throw in the fact that this woman is 5'11" tall and, easily the most educated first lady in history, and you can understand why her lovely, toned biceps are unsettling to some people.

Let me put it bluntly: there is still a subset of whites in this country who did not vote for President Obama (and never will), and is equally likely to believe that Michelle Obama's success means black beauty standards will replace white female beauty standards. But this is not about replacing any beauty standard with another one. That's a false choice. In this multi-cultural society, I believe there is (and should be) enough room on center stage for the beauty of every racial and ethnic group. To be clear, this is about making sure this country has a central and functional concern for non-white beauty instead of the marginal and peripheral concern that it has historically had. Michelle Obama's presence as a woman walking rhythmically, powerfully, even confidently in her own skin will begin a sea change in the right direction. 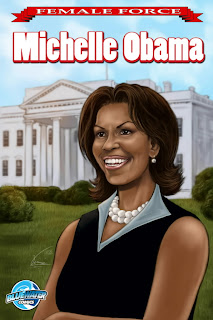 President Obama isn’t the only member of the Obama Family with a comic book. In January, Marvel Comics came out with a limited edition comic book showing Spider-Man teaming up with President Obama at the inauguration. Now, it's First Lady Michelle Obama's turn to be a superhero. Her biographical comic book hits the stands next month It will be will be officially released on April 25 and will sell for $3.99.

The 22 page comic traces her roots from the South Side of Chicago, to the Ivy League Greens of both Princeton and Harvard Universities, to the historic corridors of The White House. The book's publisher, Washington State-based Bluewater Productions, predicts this will be a big seller. You can pre-order it right here.

This comic book will be the third installment of the "Female Force" series profiling female leaders. Issues featuring Alaska Gov. Sarah Palin and Secretary of State Hillary Clinton sold out immediately upon their release.

Michelle Obama is educated, visionary, assertive, enterprising, and a serious intellectual. But, she is also a superhero! Wow. Actually, I call her a cultural hero because of the earth-shattering impact she is already having on this country, and, the world at large. Michelle Obama is likely to be just as transformational as her husband, if not more so. Chicago Magazine’s 2009 February cover story on Michelle Obama was like none other that I’ve read on her. It was a great, refreshing, engaging article that revealed her to be the fiercely determined, family- and community-oriented person we already know her to be. This is why I know the comic book will be a huge seller! 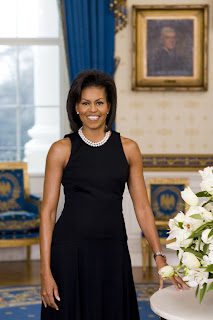 (2) Michelle Obama looking absolutely GAWJUS at the Stevie Wonder concert at the White House on Wednesday February 25th. This picture below has to be the most incandescent I've ever seen her: 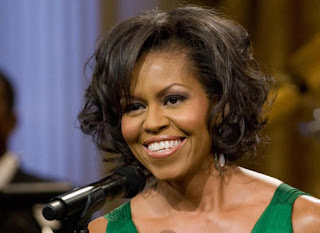 More illiminating pictures of Michelle Obama from that concert are right here.
Posted by 2morrowKnight's Awesome Blog at 4:08 AM No comments: